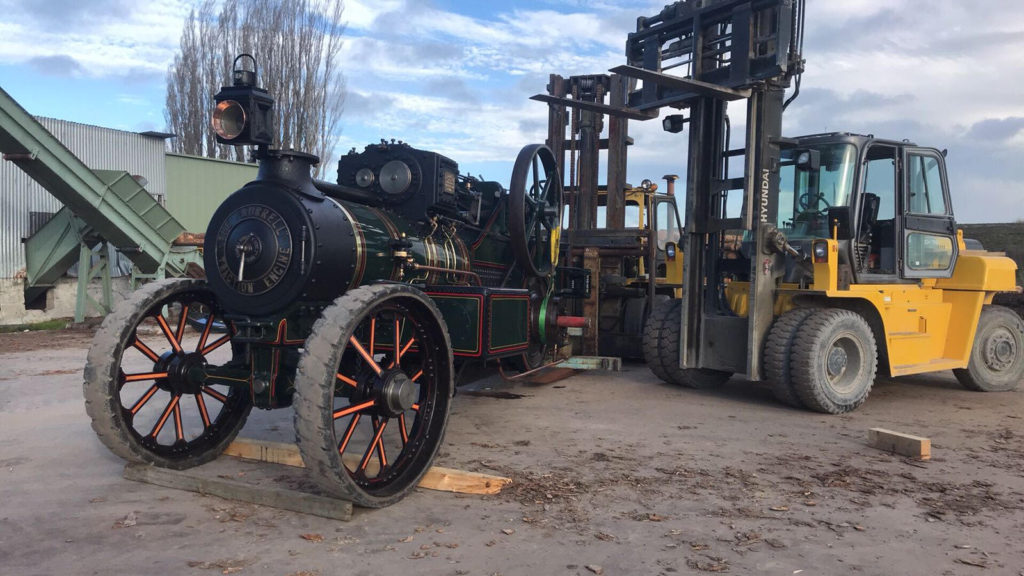 Stoneyhurst Timber Yard of the Hawkins family became the loading venue for the New Zealand contingent bound for Dorset 2018. First in was the surviving Burrell Portable, now resident in New Zealand and last seen in the UK at the Dorset Burrell Special of 2000. This would fit in the container without dismantling. 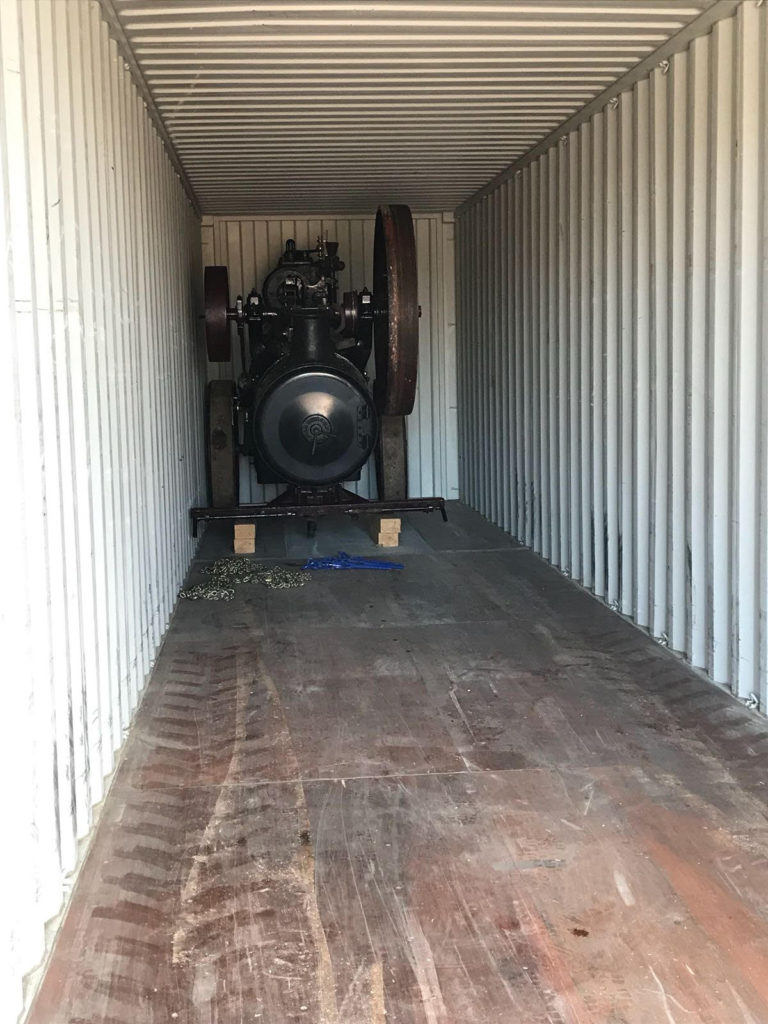 The next engine, also from the Hawkins’ stable, is a 10NHP Burrell SCC Road Locomotive No.3130 – the only survivor of this size and last in the UK prior to a tour of Europe in the late 1990’s. This fine engine is unique in the world today! It recently attended the 50th celebration of the Southbrooke Steam Engine Club at their Rangiora Rally following a total rebuild lead by Sam Henwood. He worked on it during visits from his base in Cornwall phased over four years. 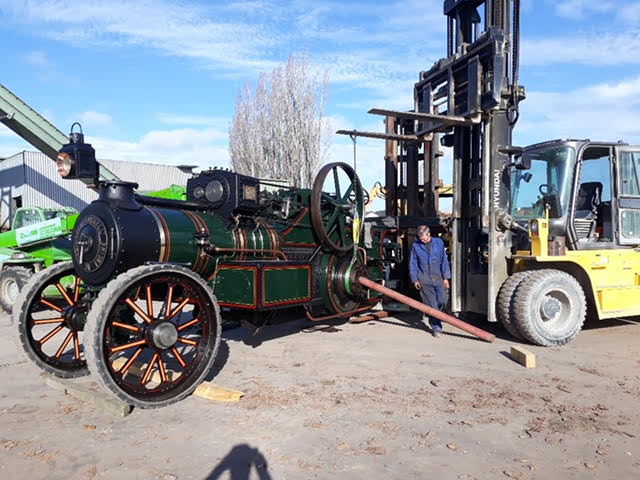 The five 8NHP Robey engines preserved in New Zealand of are often discussed in UK steam circles. Whilst a few have been lucky enough to visit and see them at home, particularly when all five were gathered at McLean’s Island last year, engine enthusiasts at Dorset will have the joy of finding an example in the New Zealand camp. This style of Robey 8NHP engine has Jarman origins with Great Grandfather, the Robey representative in New Zealand, wishing to see a batch of engines built to a specification that would be ideal for the work found in his home area. After a trawl around the manufacturers, it was Robey who showed greatest interest and production commenced.

No. 32701 of 1914 is driven down to the loading point by Andrew McKay and Grant Henderson. The Robey design is narrower and higher than the Burrell so it requires different transport preparation, but the New Zealanders have become well practised in containerising engines over the years. 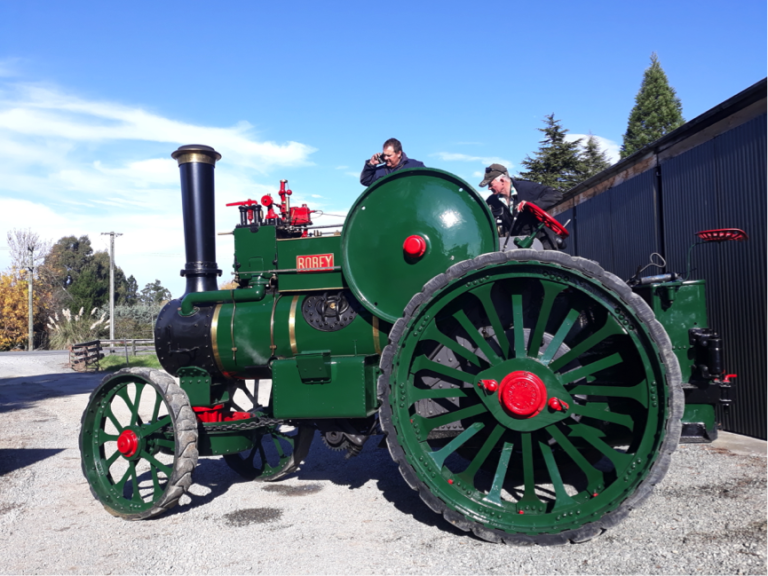 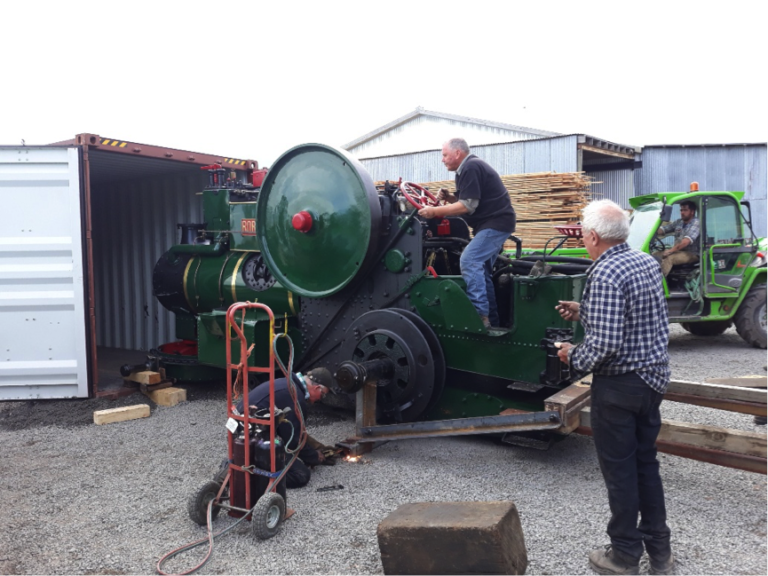 The cost of bringing engines from as far as New Zealand has often been raised but it is the road miles that cost the money. In comparison, the miles on the water are very cheap! It helps that these engines live not far from Lyttelton Harbour(Christchurch) and GDSF is not far from Southampton.

The next container is to have two 8NHP Burrells. The first is Peter Butterick’s single crank, a veteran on the UK run having only recently returned from surgery in England and a visit to GDSF. The second is Phil Kerr’s impressive long barrel double crank compound, which last wowed the crowd at the Burrell gathering in 2000. This engine and its driver will once again delight in the heavy haulage. 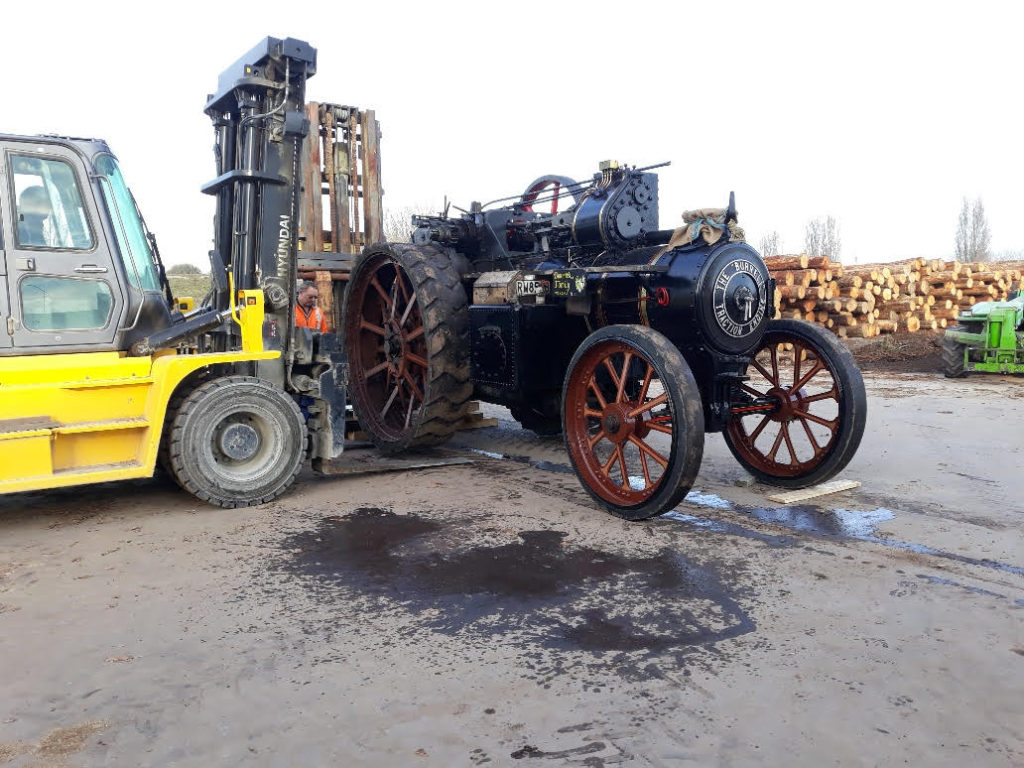 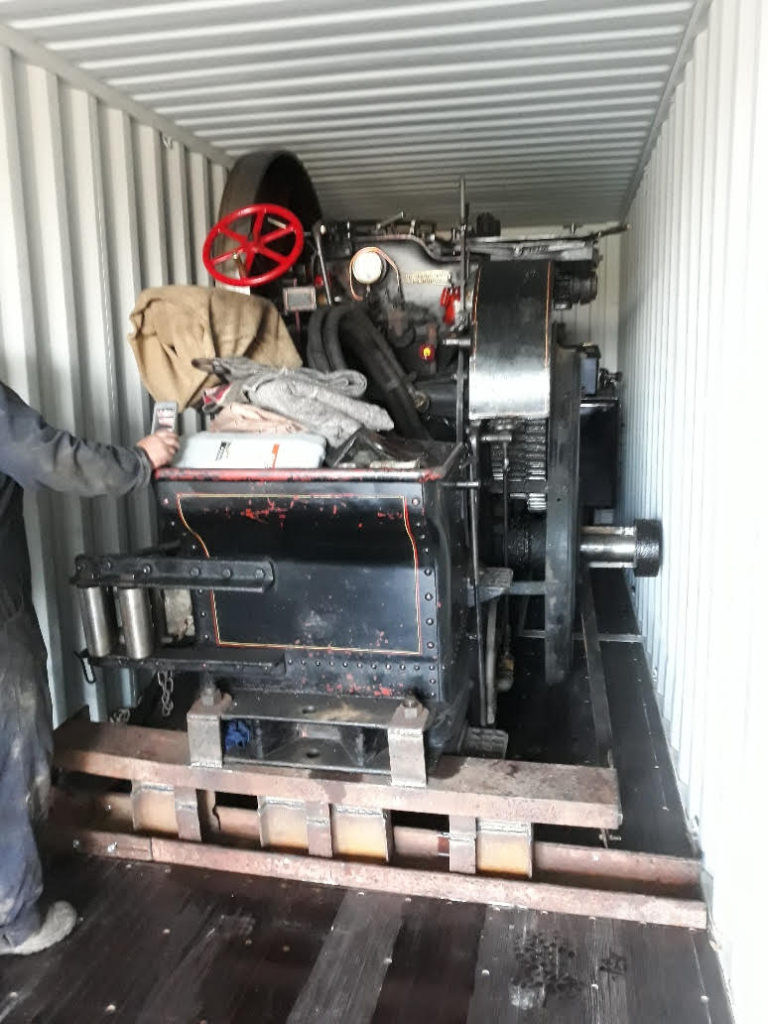 The fifth on this shipment is Nick Jarman’s 8 NHP Compound McLaren No.1719. This was the last McLaren engine (a number of rollers were still to come), imported into New Zealand. This beautifully presented engine represents McLaren at the peak of its steam development with great attention to detail. Take a look at the main and back up steam valves on all functions when inspecting this great engine. 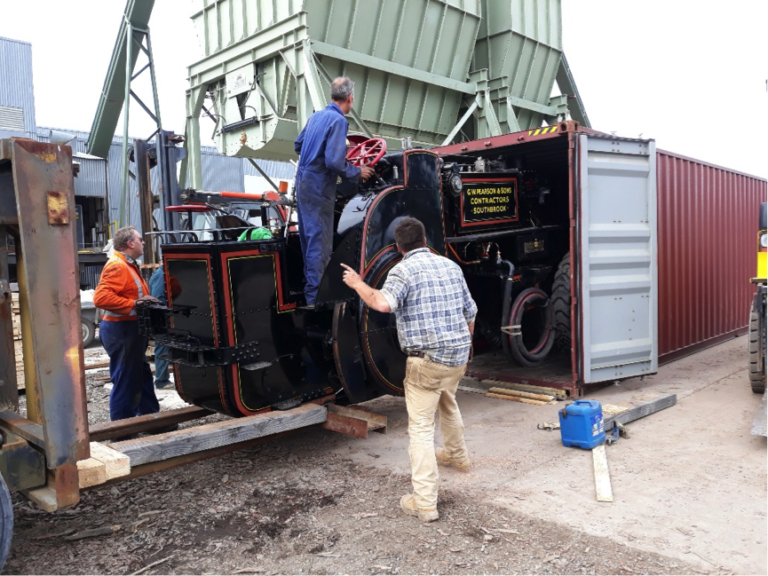 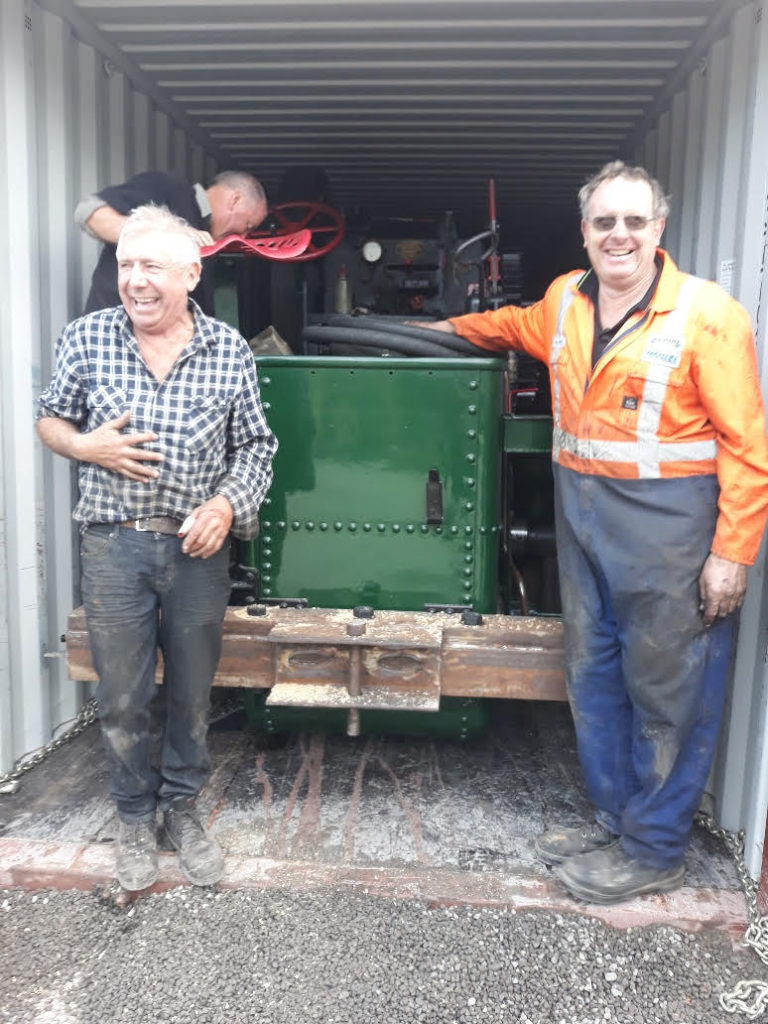 Alan Familton is present for loading but only in a labouring capacity, as his long barrel single Burrell that will be remembered from GDSF 2000 is already in the UK ready for this season.

These are not the only friends New Zealand is sending for our enjoyment. There are more coming, and it would seem many of the steam fraternity from down under will also be joining us for the 50th celebrations. Many of the friendships between New Zealand and the home countries were forged at the Great Dorset Steam Fair and this year’s event will, as always, be as much about the company as the engines.